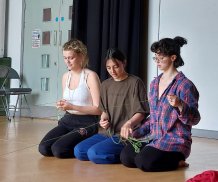 Backbone is performed and produced by University of Exeter students.

A new Belarusian play exploring the right to rest and protest will have its premiere in an Exeter park.

Backbone is written by a female playwright from Belarus who has to remain anonymous for her own safety because of the repressive political situation in the country. It is a series of monologues which are inspired by Slavic folklore, ancient Greek mythology, the recent protests in the country and the Belarusian woods.

The free open-air performance has been staged by a female and non-binary team of theatre makers, artists, and performers. The play is directed by Poppy Franziska with dramaturgy by Sophia Trewick, both of whom studied drama at the University of Exeter and are due to graduate next month. They were invited to stage the play and connected with the writer after being involved with a performed reading of Insulted.Belarus by Andrei Kureichik, a play written during the protests in Belarus in August 2020.

The writer said: "For me, this text has become therapy. With it, I tried to live through the pain. For me it was valuable how women and men responded. Someone said that saying these words becomes therapeutic for them too. Someone was hiding, someone was crying, someone was reading aloud, someone was singing this text. This is surprising for a theatrical text, which now cannot be public in Belarus. I am grateful to the team of the play for the deep contact, for the care, vulnerability and outstretched hand. To remember that people are nearby, that we are not stuck each in our own trauma is a treasure."

Poppy said: "I have never come across a text like this. There is no need to search for something within it. It speaks the truth clearly with intent to draw you in, to include you, to share something important with you. Backbone opens up a space for you to listen closely to the sounds and voices that are circulating within your wider community, within your natural environment, within your own body. When spoken out loud, the playwright's words ring in the air like music. Backbone is a reminder that although we cannot always hear it, people are speaking about their experience, about what it feels like to be alive."

Sophia said: "This performance is a meditation on the right to rest and protest. In staging Backbone outside we celebrate the power of speaking truth into the open air. Emerging from a state of enforced voicelessness, the play tends to the trauma which lives on in the land and the body. Backbone speaks to the joy and solidarity that binds us together when we need it most, giving voice to an unshakable power, one which resides in the soil, the wind, and the trees."

Backbone is performed and produced by University of Exeter students. The performers are Chloe Walker, Josie Sullivan, Lana Myburgh and Millie Stardust. It is produced by Aimeé Sweet, costume design and construction is by Sophia Thornton and Caitie Atkin; weaving and set construction is by Marjika Zwozdiak; music is by Flora McNicoll and movement training is by Isobel Ripley

Poppy and Sophia have been mentored by the Maketank cultural lab in Exeter.

Backbonewill be performed on 10th July at 7pm near to Reed Hall Pond, Streatham Drive, Exeter, EX4 4QR. A sculpture has been provided for the performance by artist Nicola Turner.