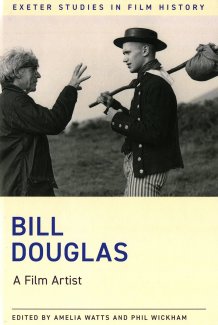 The front cover of Bill Douglas: A Film Artist

The life and legacy of one of the country’s most revered filmmakers is the subject of a new book published this month.

Bill Douglas: A Film Artist is the first study of its kind for three decades and reflects on the director’s struggles in the British film industry of the 1970s and 80s.

The book draws on the wealth of materials held at the Bill Douglas Cinema Museum at the University of Exeter, to offer insights into the creative decisions he made as well as the legacy of his work.

Edited by Amelia Watts and Phil Wickham – the Curator of the Museum – it features a range of contributors analysing different aspects of Douglas’ career. These include filmmaker Andy Kimpton-Nye examining the previously unseen home movies Bill made in the 1960s; Andrew Gordon tracing the production of Douglas’ Trilogy and the impact it had on his home community in Newcraighall, Scotland; and Cara Fraser on the influence of Bertolt Brecht on Douglas’ final film, Comrades.

“This is the first work to examine Douglas’ life and career through archive material recently made available to researchers,” says Amelia, who has just completed her PhD at Exeter on the filmmaker. “It also interrogates the idea of the filmmaker as an artist – and whether it’s possible to accommodate the distinctive and personal within such a commercial and collaborative industry.”

Though his films were met with critical acclaim, Douglas struggled to raise funding for his work and made just four films in a career tragically cut short by cancer in 1991 – his trilogy of My Childhood (1972); My Ain Folk (1973); and My Way Home (1978); and his Tolpuddle Martyrs epic, Comrades (1986).

“The legacy of Bill Douglas lives on today not just through his films but also through the remarkable collection of moving image memorabilia he gathered in partnership with Peter Jewell that forms the museum,” added Phil. “What we set out to achieve with this book is to unite and reflect upon these two elements – the filmography and the passion for cinema that Bill wanted to share with the world.”

The book, which contains a foreword by filmmaker and writer Mark Cousins, has been published by University of Exeter Press.