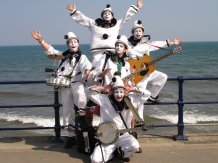 A seaside pierrot troupe - the Pierrotters

The historical significance of seaside pierrot troupes is the subject of a ground-breaking new book by one of the country’s foremost authorities on travelling performers.

“Don’t Forget The Pierrots!'' The Complete History of British Pierrot Troupes & Concert Parties is the first study of its kind to examine the origins, evolution and impact of the popular seaside performance that rose to prominence during the early 20th century.

Written by Dr Tony Lidington, of the Department of Communications, Drama and Film at the University of Exeter, the book traces the European roots of pierrot troupes in Commedia dell’arte and minstrelsy, through to its influence on contemporary popular culture such as stand-up comedy and pop bands.

“This is a massive industry that very few people know anything about!” says Dr Lidington – who has run his own troupe for the past 25 years. “But it’s very important in terms of both national cultural heritage and the way it appreciated and celebrated other styles of representation. Reshaped and reconfigured in Britain in a similar fashion to Punch and Judy and pantomime, pierrot troupes burned bright for almost exactly 60 years. During that time there were millions of performances, hundreds of thousands of entertainers, and they provided a huge contribution to the economy and the cultural ecology of the country and indeed the world.”

The Pierrot tradition dates as far back as the late 1600s in Europe, but it was not until the 19th century that the figure of the Pierrot began to crystallise in performance and visual arts in Italy and France.

In Britain, the character first appeared in pantomime as part of the harlequinade, but it was in the late 19th century, that it became popular as a form at the seasides. Dr Lidington’s book examines the influences and cultural exchanges at the time, including central European minstrelsy, and the subsequent, black-faced minstrelsy of America, from which the seaside pierrot troupes evolved.

“The European minstrel tradition was at its peak during the Napoleonic Wars, but at that time, England was unreceptive to influences from the continent, so it evolved into something of our own,” Dr Lidington says. “And the turning point came in 1891, when Clifford Essex, a London-based banjo manufacturer, saw a French production of ‘L’Enfant Prodigue’ which featured a family of pierrots and was the hit of the season. He decided to invert the look of the minstrels with faces and costumes that were white. His troupe performed at Henley and the Cowes Regattas and within five years there were a dozen troupes; within 10-to-15 years, there were hundreds! By the time of the First World War, pierrot troupes had come to represent a sense of nationality, identity, and pride, and they were a feature of every seaside resort in the country.”

Famous names of light entertainment started as seaside pierrots, including Arthur Askey, Stanley Holloway, Max Miller and Leslie Crowther, while David Bowie also drew on its tradition in some his work with Lindsay Kemp. Dr Lidington says its influence is also apparent in the work of The Goons, Monty Python, Peter Kay and The Fast Show, as well as in skiffle and the subsequent development of rock and pop groups of the 1950s and 60s.

Dr Lidington began to write the book during 2020, after amassing what is believed to be the world’s largest archive of memorabilia on the topic – including more than 10,000 images. He is now hoping to digitise this collection and set up a formal, publicly accessible archive.

“What I hope is that the book will help people to engage with what is called in academic circles ‘intangible cultural heritage’,” Dr Lidington adds. “Whether you admire it as a form of entertainment or not, I hope people will take some pride in it and recognise its immense contribution to 20th and 21st century popular culture. There has been a revival of interest in music hall and pantomime, it’s been done more recently with circus, but the detailed research and contextualisation of the form has never been done with seaside pierrot troupes and concert parties. It’s a contentious area, full of complex and challenging issues which are at the core of British national identity. I believe the book is, therefore, an important contribution to contemporary cultural and socio-political debate, which can only be good.”

“Don’t Forget The Pierrots!'' The Complete History of British Pierrot Troupes & Concert Parties has been published by Routledge.