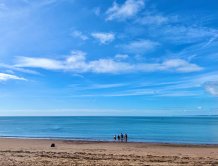 A day-long performance art event that meditates upon our interaction and relationship with the sea is set to transform Exmouth Beach into a stage this weekend.

'Who Do You Think Should Save Us?' will present a series of performative scenes featuring artists, wild swimmers and lifeguards taking place subtly amid the hustle of Sunday’s beachgoers.

The day will be documented by a filmmaker, with members of the public having the opportunity to contribute their own thoughts and feelings, some of which may ultimately become part of the soundscape for a film that will follow.

Conceived and led by artists Jane Mason, Grace Surman and Gary Winters, Who Do You Think Should Save Us? has been commissioned by the Outdoor Cultures strand for the Creative Peninsula project, which is orchestrated by the University of Exeter.

“One of the criticisms levelled at performance art is that it’s too serious, or that you have to know the language or be schooled in it,” said Gary. “Our work over 20 years has tried to break down that barrier and to make things that are both entertaining and within the tradition. Hopefully the event will be arresting, engaging, interesting and poetic and that we will be able to develop a film that will preserve that for different contexts.”

The artists have developed around a dozen scenes that will play out at intervals over the day, including a wild man discovering the sea, a fish being descaled, and a body being stranded. They will also respond to activities going on around them and interact with the public if they’re engaged.

And the day will be bookended by two larger performances in which wild swimmers and lifeguards from Exmouth Beach Rescue Club will enter the water at 7am and 7pm.

“We were interested in sea swimming and how there's been what seems to be a recent resurgence or mass movement of sea swimming and wild swimming,” said Jane. “There are many people who use the coastline for swimming, people who swim early in the morning or late in the day, solo or in groups and throughout the year – and these two performances are a response to this. They are a kind of poetic opening and closing, and both an acknowledgement of a wider community and an attempt to create a new temporary one.”

The Creative Peninsula network, funded by the Arts and Humanities Research Council, has been established to explore collaborative approaches to place-making and culture-led regeneration in Devon and Cornwall. Its focus is on increasing access and exchange between urban and rural communities, celebrating the region’s distinctive landscape and Atlantic coastline, and exploring its complex histories, through socially engaged arts programming.

Dr Evelyn O’Malley, Senior Lecturer in Drama, in the College of Humanities at the University of Exeter, added: “This event promises to be both a fascinating meditation upon our fundamental relationship with the sea, as well as an exploration of how open-air performance can reconnect people with their environment in a post-lockdown world.”