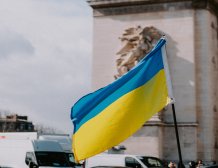 This UK tour is being produced in part by Maketank and the Devon Ukrainian Association, an Exeter and University of Exeter-based group.

A charity concert with a message of peace will raise vital funds to protect Ukraine’s rich cultural heritage.

Teacher and international star of stage and screen Nataliia Polovynka has been preserving the country’s songs, rituals, and other performative material for decades. In 2010 she founded the Word and Voice Theatre Centre, which is now a shelter for displaced Ukrainians and victims of war, collecting funds to purchase and supply war reporters, hospitals and the army with essential equipment, and organizing regular cultural and relief events for the many new residents of Lviv.

Irmos for Ukraine and Earth Song, concerts and a unique theatrical performance of ancient spiritual songs and traditional songs, will be held later this month. Irmos – from Greek, means: “link, tie, connection” and is a prayer that sits at the heart of ancient Ukrainian spiritual singing.

Nataliia will be joined by two other Word and Voice actresses - Mariia Kmits and Solomiia Kyrylova – in the UK performances. The trio will also take part in community workshops and events, some involving Ukrainian refugees living in Devon, and introduce and answer questions at a very special screening of the award-winning film, Mother of Apostles, in which Polovynka stars.

This UK tour is being produced in part by Maketank and the Devon Ukrainian Association, an Exeter and University of Exeter-based group that has been supporting new Ukrainian arrivals in the South West since March.

Maketank and DUA director Olya Petrakova said: “I believe that the amplification of Ukrainian history and cultural traditions in the West is an essential way to raise much needed support for Ukraine. Alongside this, I hope that the transmission of authentic Ukrainian culture to the newly arrived refugees in Exeter will be an important act of kindling hope and forging resilience to rebuild Ukraine when the war ends.”

Nataliia said: “The uniqueness of my work, the work of Word and Voice, is the Living Tradition of Ukraine, which is carried out in modern artistic forms of music and theater. It is only the awareness of ourselves as a unique quality in world culture and the knowledge of ourself as a people that unfolds the future of our country already today - at a time when the question of Ukraine's life as a state, as a home, as a source that nourishes and protects Western civilization is being resolved.”

Co-producer of the tour, Ewa Pasikowska, said: “Word and Voice are much more than music, they carry strength of spirit and will, years of tradition which in this time of war that affects all of us - whether we see it or not - I believe are reminders of core human values. The concert in London will be an opportunity to gather with the Ukrainian community to support them in these difficult times.”

Donations will help cover travel and accommodation expenses and support the continued activity of Word and Voice in Ukraine and the Devon Ukrainian Association in the Southwest.

Nataliia Polovynka performs ancient spiritual songs, traditional songs, romances, classical music and contemporary academic music. She teaches at the ‘Atelier’, an educational project implemented by the Grotowski Institute in 2007 and 2008. She was previously actress and music director of the Les Kurbas Theatre in Lviv and artistic director of Maisternia Pisni (Song Workshop). In 2021-22 Nataliia was awarded Best Actress prizes at six prestigious international film festivals in the US, Canada, Italy, France, Poland and Ukraine for role in the film Mother of Apostles (dir. Zaza Buadze, 2020) based on the real events of Russia’s war against Ukraine.

The Irmos for Ukraine concert will take place on 17 August at St.Giles without Cripplegate, London, on 20 August at St. Michael's, Chagford, and on 23 August at Exeter Cathedral. The group will support the Ukrainian refugee community in Devon to celebrate Ukrainian Independence Day on 24 August at Poltimore House. The screening of Mother of Apostles will take place at Studio 74@Exeter Phoenix on 27 August. A special theatrical performance of Earth Song will be performed on 29 August at the Great Hall, Dartington.

More information about the events can be found here

More information on Word and Voice can be found here