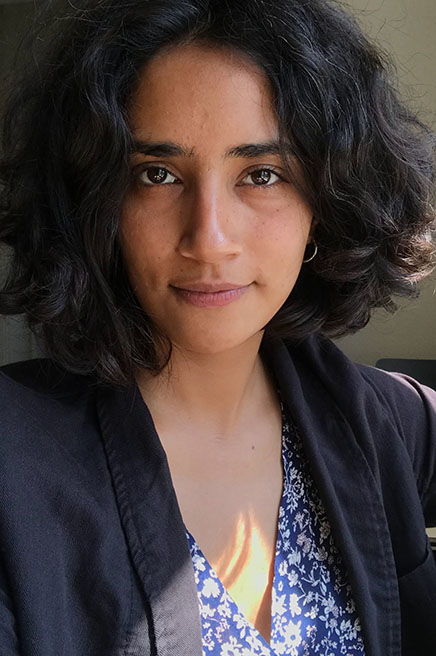 My work is grounded in Marxist-Feminist praxis, and engages with the intersections of performance and politics, particularly in the context of South Asia. I am interested in how performance practices emerge from and intervene in their political contexts, challenge colonial histories as well as contemporary imperialist-Hindutva epistemological onslaughts.

I have a background in Literature (2013, University of Delhi), Linguistics (2015, Jawaharlal Nehru University), and extensive practice exeprience in creating and performing outdoor political theatre, through my work with the Jana Natya Manch [Janam], one of the world’s most enduring Left-wing political theatre groups based in New Delhi.

I am an active memeber of the Centre for Performance Histories and Culture at the University of Exeter; the Exeter South Asia Centre; and the Political Performances working group of the International Federation for Theatre Research [IFTR].

I currently teach on modules that cover theatre history, critical theory, and activism and performance, and also supervise MA dissertations.

Prior to joining University of Exeter as a Lecturer in 2022, I have taught in various roles (2017-20) at Exeter's Drama Department and Liberal Arts Department, and have been a teaching associate (2021) at Ahmedabad University (Gujarat, India). I have also worked as an editor (2020-21) with the Indian Cultural Forum, a New Delhi-based organisation that platforms local and international debates on politics and culture.

My research is fundamentally concerned with intersections of politics and performance. In the past, for my doctoral degree (2020, University of Exeter), I worked on Street Theatre in New Delhi, examining the role that organisational alliances play in enhancing the political efficacy of the practices. My research challenged the idea of efficacy as measurable examples of social ‘change’, endorsing instead theatre’s capacity to generate political memory and duration, through collaboration with wider political projects over an extended period.

My current work concerns the sonic histories of public political performance in India, and explores new approaches to sonic performance documentation that include rehearsal and performance sounds, campaigns and protest sounds, and personal narratives from members and  activists. With this research, I aim to develop documentation approaches particular to politically driven theatre that are cognizant of issues such as duration, circulation and access, narrator rights, and ownership. This project is in conceptual stage.

I have an emerging interest in multi-disciplinary engagement with orality, aurality, intangible performance and visual heritage, and commitment to expand repositories of scholarly resources on South Asian performance cultures.

I am an active memeber of the Centre for Performance Histories and Culture at the University of Exeter; the Exeter South Asia Centre; and the Political Performances working group of the International Federation for Theatre Research [IFTR].

Since 2019, I have been involved in varying capacities in research projects that engage with South Asian cities, urban spaces, performance and politics.

2022-24 Performing Resistance: the role of theatre and performance in 21st century workers’ movements.
I was listed an International Consultant on this AHRC Research Development and Engagement Fellowship project led by my colleague Dr Rebecca Hillman, at the time due to my independent status. I continue to provide support for liaising with practitioners in India for this project that aims to explore and develop the role of cultural practice in social and industrial movements.

2018-19 Performing the Periphery: The Politics of Performance on the Urban Periphery in South India
An international AHRC network grant led by Prof Cathy Turner, incuding colleagues from the University of Exeter and from National Institute of Advanced Studies [NIAS], Bangalore. I assisted in organising resources, documentation, liaising across various participating groups, organising an exhibition showcasing research outputs.

I would welcome enquiries from potential doctoral students interested in any areas of my research.

If you are intrested in working with me please send me a 500 word outline of your proposed research topic.