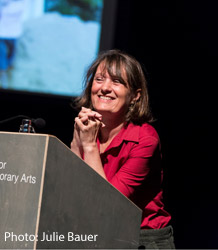 My research principally concerns dramaturgies of place and space, including walking art, site-based performance and what performance does within and as part of place.

My current work concerns the ways that performance engages, has engaged or might engage with the richness of outdoor culture, and the often painful histories that have formed our environments, including the human and more-than-human participants. A range of projects explore these concerns in different ways, and lead me into thinking about environmental crisis as simultaneously a cultural and political one, which cannot be addressed through technological 'solutions' alone.

I am writing a monograph on 'Performing Gardens', under contract with Palgrave Macmillan, which draws on a number of these projects, not always directly.

Creative Peninsula (2022). Building on previous work with Evelyn O'Malley (see below), for this AHRC-funded KE project led by Tom Trevor, we have commissioned two performances to engage with outdoor cultures in the SW Peninsula, and will be working with Tom to develop a two-day event exploring collaborative approaches to ‘place-making’ and culture-led regeneration in Devon and Cornwall. Aimed at artists, arts professionals and local authorities, it will consider how culture can help to reinvigorate and re-tell stories of place, working to overcome barriers to social inclusion, wellbeing and environmental sustainability.

Green Stages (2022): An initiative funded by the ADR fund (internal) to create a green stage space on Streatham Campus, and to work with the network O-P-E-N to host a symposium and several events around the subject of outdoor performance.

Outside the Box (2021): Open Air Performance as Pandemic Response. This AHRC Covid-19 rapid response project, led by Evelyn O'Malley (PI) and with Tim Coles (Business School) and Giselle Garcia (Drama), concerned the potential for open air performance to develop appreciation and care for the environment as we attempt to 'build back better' in a safe way. We commissioned work for performance in Exeter in 2021, with publications in Frontiers (2022) and Critical Stages/Scènes critiques (forthcoming).

I am always interested in walking performances, and am a core member of artists' collective, Wrights & Sites.

Key publications include Turner et al Performance at the Urban Periphery: Insights from South India (Routledge, 2022); Dramaturgy and Architecture: Theatre, Utopia and The Built Environment (Palgrave, 2015), shortlisted for the TAPRA David Bradby award, 2017; Dramaturgy and Performance, 2nd Edition (Palgrave, 2016), with Synne Behrndt; The Architect-Walker: A Mis-Guide (Triarchy, 2018) with Wrights & Sites - one of a series of published 'Mis-Guides' which provide provocations for disrupted walking.

My sometimes less up to date research blog can be found at http://expandeddramaturgies.com/category/sometimeswalking/

Information on Wrights & Sites can be found at http://www.mis-guide.com/

Personal tutees can book a meeting via email. I'm happy to talk and can usually arrange to speak without too much delay.

I am series editor of Palgrave's 'New Dramaturgies' series, collaborating with Synne Behrndt, and we have collaborated in researching dramaturgy since 2005.

I have been a collaborator with Wrights & Sites since 1997 - this company comprises myself, Stephen Hodge, Simon Persighetti and Phil Smith.

Here are some of the PhD projects I have supervised recently:

Lizzie Philps: 'Parents Performing Walking: how can understandings of walking performance be enhanced through participatory live art works which include children?' (2019)

'Outside the Box' is a project that engages local authorities, including our own City Council, and artists around the country, pooling their experiences to establish a range of possibilities and potentials for open air performance to 'build back better' in terms of our engagement with the environment. We are also working with Exeter Culture on this. Four major commissions will enhance the city's offer for leisure activities in summer 2021.

The 'Performing the Periphery' project included elements of public engagement through curation and commissioning of locally-based artists in Bengaluru and Kochi. Further impact may arise from aspects of our research into the politics of performance - both its role in shaping narratives of place, and the impacts of urbanisation on long-standing performance practices, often involving animals.

Wrights & Sites have curated work for festivals and a public art work for Weston-super-Mare. Our 'Mis-Guides' have been used in schools and colleges worldwide. Most recently, I have contributed to discussions at RAMM concerning ways of engaging children with the collections.

My project on 'Porous Dramaturgy' has brought academics and practitioner-academics together with practitioners and producers outside the academy in discussions about interactivity and community. This has facilitated workshops held in Northern Ireland by project partners Tinderbox and artist Katarina Pejovic, which culminated in a workshop demonstration and discussion for an invited audience. This workshop, was partly concerned with knowledge exchange and partly brought local concerns to bear in considering and developing the research.

In 2022 I will be teaching a new module on 'Theatre of Space, Form and Colour', with a focus on the Bauhaus. This is a development of previous work within the first year 'Research and Performance' module, in which we explored the work of the Bauhaus in 1920s Germany (2015). This blog entry, coming from that project, gives a good sense of the way in which my research sometimes informs my teaching, and vice versa. It includes the text of a presentation I made on this teaching work to the Prague Quadrennial in June that year, at which I was proud to show videos of the final performance, also found here.

Other modules I have led or taught on at Exeter include: Theatrical Interpretation: Practitioners; Playwriting; Dramaturgy; Performance and Interpretation; Practical Essay; Dissertation; Theatre and Ecology. I have also convened MA Modules in Performance Writing and Playwriting.

Cathy Turner is Professor of Drama at the University of Exeter. Her book, Dramaturgy and Architecture: Theatre, Utopia and the Built Environment, was published by Palgrave in 2015. She is joint author, with Synne Behrndt, of Dramaturgy and Performance (Palgrave Macmillan 2008), and joint editor, with Behrndt, of Palgrave's 'New Dramaturgies' book series. She is a core member of Wrights & Sites, a group of artists whose work is concerned with our relationship with space and place. Their most recent work is The Architect-Walker: A Mis-Guide (2018). In 2010, the company completed a major public art commission for Weston-super-Mare, curated by Situations and Field Arts and funded by CABE. She has published on dramaturgy, writing for performance, space and place and led grants investigating performance and urbanisation in South India, and dramaturgies that are 'porous', inviting participation.